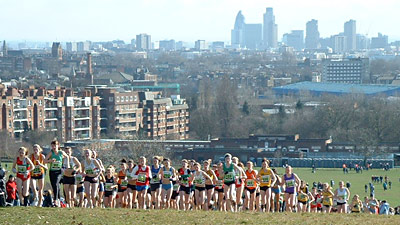 Stockport Harriers had great weekend at the National Cross Country Championships with a contingent of 29 athletes along with their parents traveling down to compete at Parliament Hill, London.

The men's race was especially great to watch as Steve Vernon finished third in his first senior outing at the Championships, beaten by flatmate and training partner Peter Riley of Leigh Harriers who won the race, making it a great day for the Northern clubs.

Both of them had great support from the Stockport crew who have got to know Pete and Steve well over the last few months and stayed on to watch them both presented with their trophies and medals. 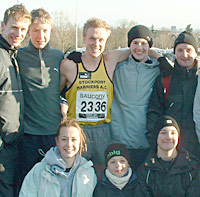 All the teams put in great performances on one of the toughest courses in England but they all enjoyed the tough climb up Parliament Hill and the famous London backdrop.

The under-17 women's team were 7th with Jess Coulson producing another outstanding race in 4th backed up by Rhea Fallows in 81st, Rachel Malbon 83rd, Carley Stansfield 88th and Ruth Jenyon 123rd.

The East Cheshire man had opened up a 10 metre gap on Ross but unfortunately for him went the wrong way with 800 metres remaining to give Ross the lead despite Ross's attempts to call him back.

Jenny Murray made a welcome return to racing in her first race since last October's Nairobi Marathon where she suffered a stress fracture to her foot. She was first woman in the tough Huddersfield 10k in a time of 39.29 despite recent illness in the previous week and is now hoping to get back to some sort of normality in her running.

Last weekend Jenny together with Jenny Knass, Vicky Buckley, Estelle McGuire, Liz Bowden and coach Phil McCann attended Bud Baldaro's GB Marathon Training Camp held in the Forest of Dean. Speaking were the likes of UKA's Alan Storey and Spencer Barden along with British marathon runners Hugh Jones, Steve Brace and Paul Evans also giving advice. The running sessions themselves were highly beneficial and some will be added to the Ladies' squad training repertoire. Some of the best British men and women were there including Tracy Morris who was about to be jetting of to Melbourne for the Commonwealth Games.

Jenny Murray who gained her first GB vest at the Nairobi Marathon in the 'Greatest Race on Earth' series, the others being in Mumbai, Singapore and Hong Kong, found out that the team had won overall and will be receiving medals, a great reward for Jenny.

As she will not have had enough time to train for the London Marathon since her injury. Jenny was asked at the camp if she would like to be one of the pacemakers at London to take a certain pack through to halfway, another added recognition for her.

The next event the girls will be the Wilmslow and Liverpool half marathons, both on 19th March, the latter including the AAAs Women's Championships and the squad will have teams in both.

New recruit Toni McIntosh (picture right) competed in her first road race in Stockport Harriers' colours after coming back from injury. She finally got through her first race this year without any further reaction. Toni finished 10th open lady and 13th overall in a time of 30-43 with the winning time for the ladies being International Liz Yelling with 26-01, it was a good workout for Toni who was very pleased with her performance. Now it's back to a more intense training to see if she will be in good shape for the London Marathon in April.

While Stockport's men could only manage one finisher in the senior race the ladies' team finished 19th despite missing some of their stronger counters. Samantha Thomas was first home in 94th place.

Silver medals for Steve and Bashir 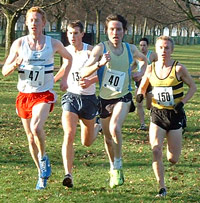 Steve Vernon opted to start his 2006 campaign running the Scottish 4km Championships after being invited up to run from a Scottish contingent who have watched Steve's progress in every World Cross Steve has run since running at Belfast as a junior in 1999.

He ran in the East Kilbride colours and finished 2nd to Scottish steeplechase champion Simon Plummer.

Bumper turn-out for the Four Villages Half Marathon 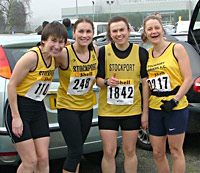 Vicky Barrett, Sharon Glendon, Samantha Thomas and Liz Bowden before the start of the Four Villages Half Marathon

Stockport Harriers had 42 finishers in last weekend's Four Villages Half Marathon from a field of 1,600

Top performer on the day was Alan Pover, a clear winner in the over-55's category in an incredible 1.16.48.

Further down the field there was a total of 13 personal bests from the ladies' section, including Ruth Lee and Sharon Glendon both knocking 5 minutes off there previous best times.